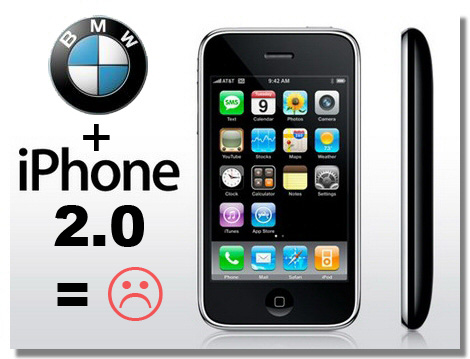 UPDATE – *FIXED* – It appears we’ve found a fix that will get all your contacts showing up on the iDrive again. You simply need to add 2000 fake contacts to your iPhone. There are detailed instructions, vCard/CSV files available to download and step by step screen shots in a new post here – Fix for Fix for iPhone and BMW iDrive address book not synchronising.

Looks like we’ve found a fix for this that involves creating a large number of fake contacts on your iPhone. Mine started working when I sync’d with my Exchange server and 2500 new contacts appeared on my iPhone and at the time of writing this 3 out of 3 people who tried the fix have reported back with success. Click below to jump to the relevant place in the comments and read a few above it from Vants and Rajesh too for more info:

UPDATE (18th August 2008): ****FIXED***** ****NOT FIXED*****
Apple have just released iPhone 2.02 update and I’m currently downloading it. Hopeful that this update will finally fix all the iDrive address book issues, watch this space…..I’ve just got back from testing 2.02 with my iDrive and finally, it’s working again! (iPhone 2.02 fixes BMW iDrive contact syncing)Sorry guys and girls, it looks like a was a little premature on this one. My contacts DID all show up on the iDrive screen and I scrolled through, jumped from A-N-W-etc and I came in to get the camera for a few shots for this article. When I went back out, my iPhone paired but after a long wait screen there were NO contacts shown! I removed both pairings, powered off the car and the iPhone and tried again but still nothing. I then updated my friends brand new 3G to 2.02 and tried syncing that (which has never been seen by the car before) and it paired but still no contact sync.

UPDATE (5th August 2008):
Apple have just released iPhone 2.01 update but don’t get too excited, it doesn’t seem to resolve any of the BMW iDrive issues.

I downloaded the 240MB update, waited patiently for the iPhone to backup, update and then restore and then nipped out to my car (at 1:30am) excited to see if it worked…NOPE….seems Apple thought better of it than to help us BMW drivers out. It still doesn’t sync the address book with my M5’s iDrive.

I deleted both pairings and then repaired, gave it plenty of time to search for and sync contacts and it still shows no contacts available.

IMPORTANT – If you are affected by this issue, which many seem to be, please submit a quick feedback/bug report via Apple’s iPhone feedback form. The best thing to do is to post your iPhone version, car make, model and year as a comment to this thread then copy and paste the same to the Apple Feedback form. The more feedback Apple get the more likely they are to bring out 2.01 fixing the issue.

The original iPhone running all versions up to and including the latest 1.1.4 would connect to BMW’s bluetooth perfectly and then all your contacts would appear on the iDrive display for you to scroll through or better yet voice-dial if you had that as a factory option. 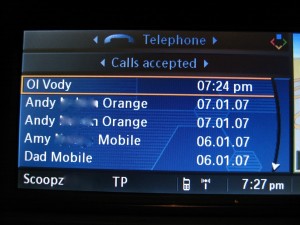 I have just downloaded and installed iPhone 2.0 onto my original iPhone (yes 1 day early so it might not be the official version i know – it’s showing as version 2.0 5A347) and went out to the car (2006 BMW E60 M5) to check the compatibility with my iDrive via bluetooth. 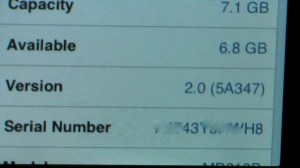 I really wasn’t expecting there to be a problem, since BMW actively advertise they are working in partnership with Apple to make the iPhone integrate with iDrive and since there’s not been any hardware change as it is my original iPhone that has always worked with iDrive from v1.1.2 to v1.1.4. 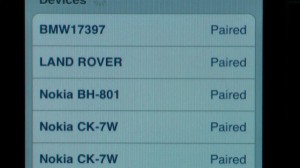 I turned on the ignition and at first I thought I’d have to pair up the phone again having had to update the software and restore a previous backup. To my surprise when I checked in the Blueotooth menu on the iPhone, all my old paired devices were still there and sure enough it connect to the BMW bluetooth automatically. I waited until the signal meter appeared along the bottom of the iDrive screen showing the pairing was successful and then I opened up the iDrive communication page to list my A-Z of contacts and they all appeared…briefly!

After my initial relief that iPhone 2.0 didn’t “break” anything in the way of BMW iDrive to iPhone contact syncronising, I slowly realised that the initial list it shows is a cached version from the last time the phone was connected and then the little clock timer appeared indicating it was searching the phone for new/modified/deleted contacts to refresh it’s cached copy. After about 20 seconds it was done and I was presented with a BLANK A-Z, it had wiped them all off the iDrive. 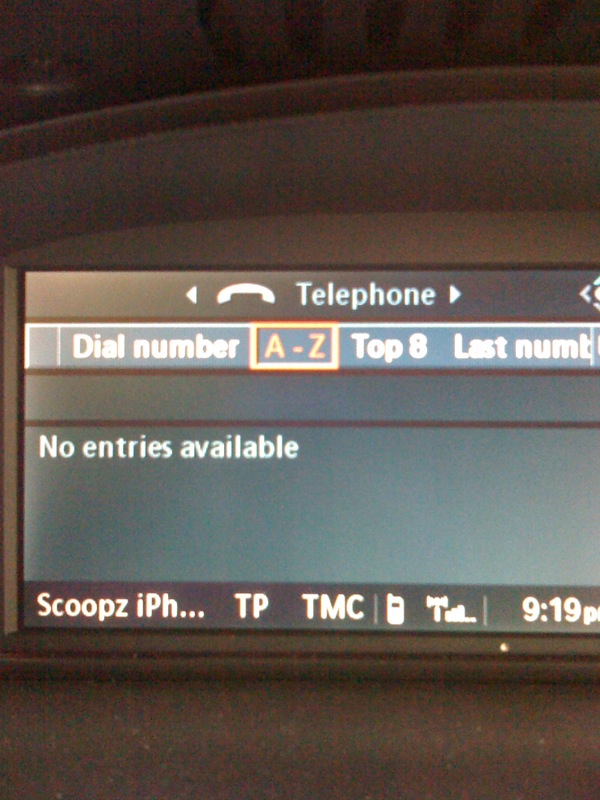 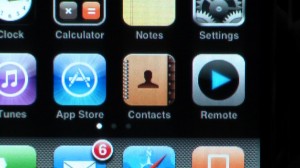 I powered the car off, powered the phone off, powered them both back on, let them pair and sync and still nothing. The iDrive was reporting that there were NO contacts on the iPhone that it could see. I check the iPhone to verify I’d not been an idiot and told iTunes not to sync contacts but they were all there (600+), in the nice new Contacts icon on the home screen with the new search feature.

I decided to start from scratch and removed the pairing from the iDrive bluetooth menu and from the iPhone bluetooth menu. Then I began the setup new phone procedure on the iDrive to connect my iPhone as though it was a new one. iDrive went into bluetooth visible to all devices mode, iPhone found the BMW bluetooth, paired, asked for passcode, 0000 on iPhone, confirmed 0000 on iDrive and connected.

It showed a “Please wait…” message along with that damn annoying clock timer icon again as it browsed the iPhone to suck all the contacts out of it. It returned NOTHING. The A-Z was empty. I tried voice-dialing from the BMW voice dial button, feature not available.

When the phone rings for an incoming call it shows the you number on the iDrive display but doesn’t link it with the name in the contacts. If you have the iPhone in your pocket and want to call somebody, unless you’ve received a call from them recently so that they’re in the iDrive recent received list you’re going to have to get the iPhone out your pocket, unlock and find the contact the old fashioned way.

This is really bad news for those in the UK and other countries where not only talking on a mobile whilst driving is illegal, but where even touch your mobile whilst driving carries fines and penalty points. I’ve gone from being fully legal with hands-free voice dialing to illegal overnight, thanks Apple!

Please use the comments section below to post your findings stating your car model and year plus your iPhone version. If you have other cars that sync the contact list (Mercedes? Audi? etc) then post your results for them to for others to see.

It’s the kind of innovative forethought you expect from BMW: the Apple is compatible with most BMW models from day one. The communication and music functionalities of the Apple iPhone can easily be operated with the in-vehicle control elements and displays.
All you need besides the Apple iPhone to make a call, listen to music or access your address book in a BMW is the USB/audio interface and a suitable mobile phone preparation with Bluetooth interface. Enjoy your Apple iPhone and your BMW in parallel, for the sheer pleasure of both worlds.

iPhone is a trademark of Apple Inc.