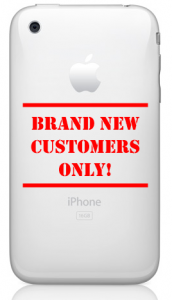 19 days after it was initially launched, it still appears Apple have restricted the White iPhone 3G to Apple stores and “brand new customers only”.

There are only 3 official sources for the iPhone 3G in the UK:

If you are an existing iPhone owner and wish to upgrade you cannot go to an Apple store! All upgrades for current iPhone users have to be done through Carphone Warehouse or O2.

I’ve made near daily visits and several phone calls to both O2 and Carphone Warehouse trying to confirm a date that they’ll be receiving stock of the White iPhone 3G so that I can upgrade and some of the responses I’ve been getting are shocking:

“oh no sir, there’s no white iPhone only black, you must be confusing it with the iPods?”

“the White iPhone is going to be exclusive to the Carphone Warehouse, O2 won’t have any”

For Pay As You Go customers only!! Don’t talk rubbish, why would a PAYG customer (who’s going to be paying well over the odds for the phone in the first place) be restricted to getting the White one, which is 16GB only? Christmas time? Really? The Apple store has plenty of them in right now.

There have been a few people who decided they didn’t want to wait and purchased a White iPhone 3G in the Apple stores (who have plenty) and signed up to a new O2 contract in store. When they got home they just called O2 and played *dumb* pretending they thought that was the way they were supposed to upgrade and had their original contract moved over and the new contract just signed in store cancelled. This is risky though, if O2 don’t take pity on you or think you’re trying to pull a fast one they could leave you stuck with 2 simultaneous iPhone contracts!

I’m the kind of person who would have normally tried doing the above *playing dumb* trick by now but unfortunately it’s not that straight forward for me. I need to simultaneously upgrade my existing iPhone and migrate from a personal to the newly available business tarriffs. I also need to do the same for one of my employees and migrate us both to the same shared business plan and then migrate two current O2 Nokia users to the same shared iPhone tariff but using the two superseeded original iPhones…and as luck would have it, all this is possible but only at an O2 store who don’t have White iPhones.

If you happen to know of any O2 stores that have White iPhones in stock please do leave a comment below and put me out of my misery.

UPDATE (23rd August 2008): Good news, existing iPhone owners can now officially upgrade to the white iPhone 3G at any Carphone Warhouse or O2 store (stock levels permitting). I walked by both CPW and O2 stores today and saw signs advertising white iPhones now in stock. Half an hour later and I’m walking out the door with a white iPhone 3G. I asked when they had stock of the white ones and they said yesterday (22nd August) so if you’ve been waiting, go get one, the white is DEFINITELY better than the black in my opinion as it doesn’t show up any finger marks or scratches on the back!