I very rarely use my old MacBook Pro but I recently came to use it and there were 10+ updates waiting to be installed including the new OS X 10.5.6 update.

I left them all downloading and updating but one, the Safari update, refused to work. It said I had insufficient access rights but considering I’m the only user and I’ve always been setup as an administrator this was strange. 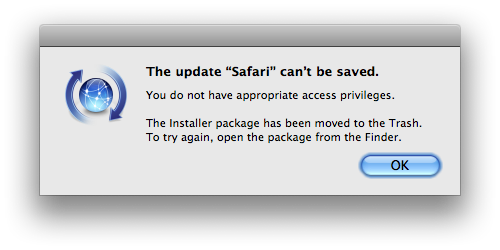 I tried repairing disk permissions but that didn’t work. Then I thought perhaps it just needs to be restarted having just installed all the other updates so I dutifully rebooted and the same thing happened when I rebooted.

The Update Safari can’t be saved. You do not have appropriate access privileges. The installer package has been moved to the Trash. To try again, open the package from the Finder.

and then deleted the Safari folder that was in there:

and then tried to install the Safari update again from the Software Update window and it downloaded and installed the update without a problem.