Ever since I bought my MacBook Air

nearly a year ago I’ve been plagued with a constant annoying problem, if I let the battery run completely flat, when I connect to a power source I get a warning saying my computers date is set earlier that March 24th 2001. 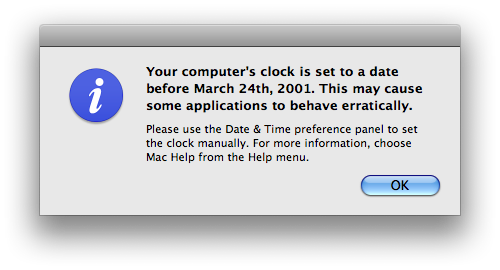 Your computer’s clock is set to a date before March 24th, 2001. This may cause some applications to behave erratically. Please use the Date & Time preference panel to set the clock manually. For more information, choose Mac Help from the Help menu.

Clicking on the clock in the top right corner of the screen does indeed show that the date and time is set to January 1st 2001. It normally shows midnight but it had been on charge for about 5 hours hence it’s showing 5:13am.

Almost all computers, both desktop and portables, have a small secondary battery on the motherboard (CMOS battery) which is used to keep the computer’s internal clock ticking when disconnected from the mains power supply or a notebook battery runs completely flat. It would appear that my MacBook Air

‘s CMOS battery is defective and as such when the main battery is completely drained the onboard clock has no backup power source and loses the date and time.

Other than the annoying warning message it isn’t really too much of an problem for me though, I have had a few problems in the past joining my Windows domain at work as the domain server was reporting the MacBook Air

updates the internal clock with the correct details (as long as you are connected to a network).

I’m not sure how often OS X polls the NNTP servers for the time but I’m sure if I left it alone with the wrong date/time it would probably self-correct within half an hour or so of being connected to a network. I might run little snitch and see if I can see how often it’s pinging the time.euro.apple.com server.

I have phoned Apple customer support and they have said this is obviously not normal behaviour, the onboard CMOS battery should be retaining the date/time for several weeks if the main battery is complete drained and the CMOS battery should recharge itself whenever the MacBook Air

is connected to a power supply. It’s still under warranty for a few more weeks so I just need to take it in for repair but I’ve just not got around to it yet.

UPDATE 4th February 2009: I’ve just received my Macbook Air back from repair, along with a new screen/display unit it’s also had a completely brand new main battery. I called and spoke with the technician carrying out the repair and quizzed him about the faulty cmos battery and he informed me that most of the recent Macbook range including the Pro’s and the Air have phased out motherboard/cmos/clock batteries in favour of a capacitor based system in the MBA and small capacitor/onboard rechargeable battery in the others.. He said that even when your laptop battery doesn’t have enough power remaining to keep the disk spinning and screen on, there’s plenty left to power a simple onboard clock. As such the MacBook Air

just has a small capacitor to power the clock if the main battery is left so long that it runs down completely. In my case, however, they ran tests on the battery and it was draining too quickly when the was only a few % left and was showing as faulty. For this reason they were authorised to replace the entire main battery and they have run some tests (not sure what tests) to confirm the problem is resolved. I’m very happy, I’ve looked at the stats on the new battery and it most certainly is new, showing at the time as only have 2 “cycles” (full charges) under it’s belt and 99% health.

UPDATE 12th March 2011: I am still plagued by this problem on the same Macbook Air a few years on. The only difference is now the warning says my computers date is set before January 1, 2008 whereas before it warned it was set before March 24, 2001. I’m guessing this is because I have now updated the OS to OS X 10.6.6 Snow Leopard? 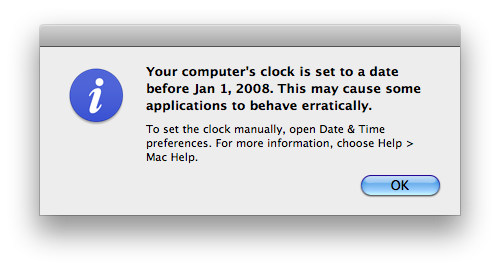