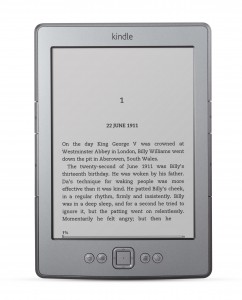 My inner geek is telling me I need a Kindle. Even before the newer and cheaper models I’ve always been drawn towards a Kindle which is strange because I don’t read books, period!

I have an iPad 2 and several eBooks on that in both iBooks and Kindle app format. I’ve started to read books and then lost interest or been distracted by push alerts for a game of Words with Friends of Twitter alerts. That’s one of my issues with the iPad as a reading device, it’s far too easy to get distracted. I should really turn on AirPlane mode if I want to sit down and seriously read a book on the iPad but I just can’t bring myself to do that and I don’t know why.
Reflections and glare have always been my biggest gripe about the iPad and iPad 2, so much so that I recently bought and fitted an anti-glare matte film to my iPad 2 and I’m kicking myself for not doing it sooner, I won’t go into the details but you can read more about that here.Then there is the big issue of readability/legability of books on the iPad screen. I’ve played with Kindles a fair bit and they hands-down beat the iPad in terms of having a natural book-esque quality to the screen and words. The e-ink almost perfectly mirrors a printed page and when I first saw an e-ink screen in a shop I thought it was a dummy display model until the page changed. e-Books were made to be read on an e-ink display like that found in the Kindle, it’s easier on the eye and there are no problems with glare or reflections.

The early Kindle’s suffered from slow page transitions but from what I can tell this is no longer the case on the newer Kindles. Like a real book there’s no illumination for the screen, no backlight at all, so if you want to read in low light in bed you’ll still need your bedside light on. That doesn’t bother me too much but it would be nice if they could make some kind of low power illumination similar to that used in kameleon remotes or the very old Psion Series 5mx palmtop I used to own.

I’d also be a little less precious about a Kindle I think, I don’t know if I’d buy a Kindle cover for it or not, the screens seem pretty robust even if the main unit itself is quite light and feels like cheap plastic. Having tried a variety of different iPad cases I’m sure I could find some Kindle covers I like.

At present I subscribe to a lot of magazines with Zinio and read them when I get chance. These wouldn’t port well to the Kindle’s black and white screen and colour is a must so I’m going to continue reading them on my iPad. However, I’m now teetering on the point of buying a Kindle to try and get me into the habit of taking time out from my busy tech life, leaving my iPhone, iPad 2, MacBook Air and other gizmos in the other room and sitting down to read a good book. I doubt I’d use a Kindle as much as some of my friends who rattle through one if not two books a week, I wish I had that much spare time on my hands but I don’t but I’d certainly like to get into the habit of reading a book a month at least.

My other draw towards getting a Kindle is to see how they cope with PDFs. In work my employees have dozens of technical engineering journals to read every week, they used to be delivered as hard copies in the post but almost all have now converted to issuing PDF only copies of their technical journals. This isn’t a problem for me on the iPad 2 but none of my staff have iPads and I’m not likely to buy them all one any time soon. I have toyed with the idea of buying an office Kindle or two that they could load their PDFs onto and take home to read at nights/weekends but when I last looked into this, the early Kindle’s didn’t handle PDFs very well at all. From what I can gather now though, the latest Kindle have native PDF support and it’s simply a case of drag-n-drop your files via USB.

I have watched several YouTube videos that say in practice PDF viewing on a Kindle should be simple but in practice it’s not. Since the PDFs are not in kindle format you can’t mess around with font styles, font sizes etc and many PDF documents we have are published with text in columns across the page. The Kindle doesn’t appear to have a mode to extract that text to read in a flat page so you end up constantly panning around the page which isn’t very natural or efficient.

Long story short, I’ll still probably buy one of the new Kindles for experimentation and to see if it helps get me into the habit of reading books on a regular basis. Watch this space.