We’ve been a big fan of the comically oversized Just|Mobile Alupen and it serves its purpose well but recently we came across a new contender to the Best iPad Stylus award, the Musemee Notier, so we thought we’d put it through its paces. 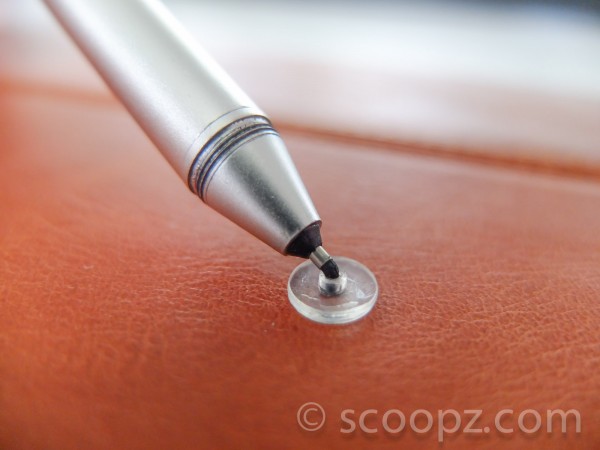 Like all our other tablet accessories we review, we always ensure we use the actual items for several weeks before writing a review so you can rest assured that this is not just some marketing blurb we’re regurgitating here but it does mean the item won’t look pristine in the photos, so any marks and scratches you see are from using it in the real world for a fortnight, lets begin. 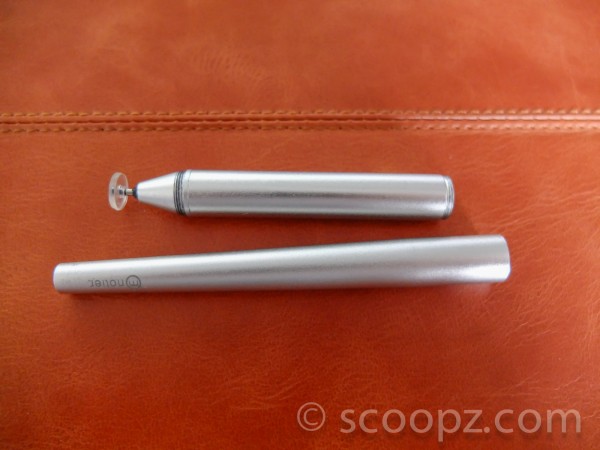 The Notier is a completely different style of stylus, it doesn’t have the typical big round conductive rubber tip found on almost all other styli (or styluses, both are gramatically correct), instead the Musemee Notier has a clear, round perspex disc which appears to have an additional clear sticker over the end that is slightly softer than perspex and very slippy which helps it slide along a glass surface. The clear disc is connected to the aluminium stylus body via what appears to be a thin rubber cylinder which looks identical to a 0.5mm technical pencil lead, only it’s made of flexible rubber. 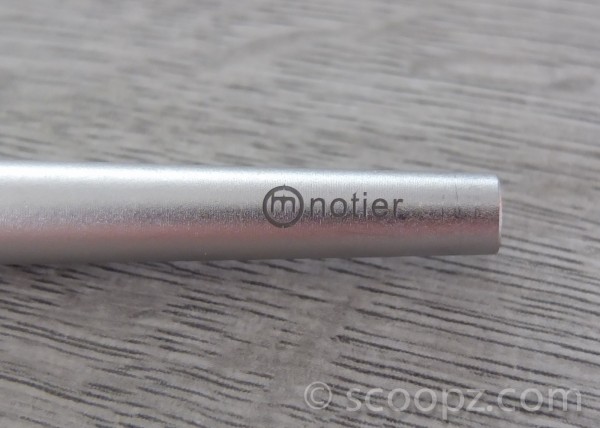 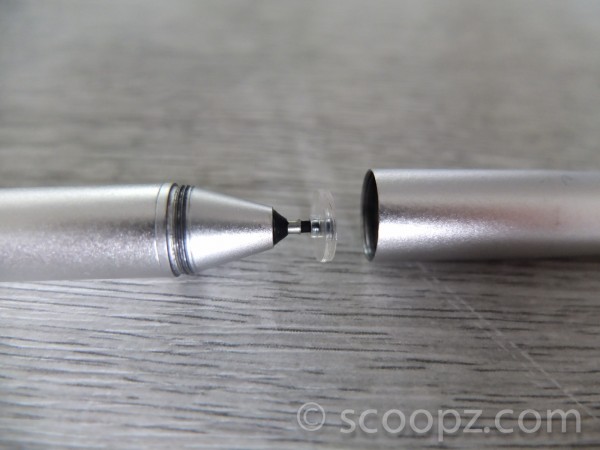 This rubber cylinder sits mostly hidden in the body of the sylus nib with 0.5mm to 1mm actually exposed and it couples the stylus body to the stylus tip in such a way that you can articulate the tip in any direction you like. This allows you to hold the stylus at any angle you like, seriously, any angle that feels comfortable the stylus nib will remain in contact with the screen and still work. This multi-angle use is nothing new though, you could use the Just|Mobile Alupen at pretty much any angle too because it had such a big bulbous tip. 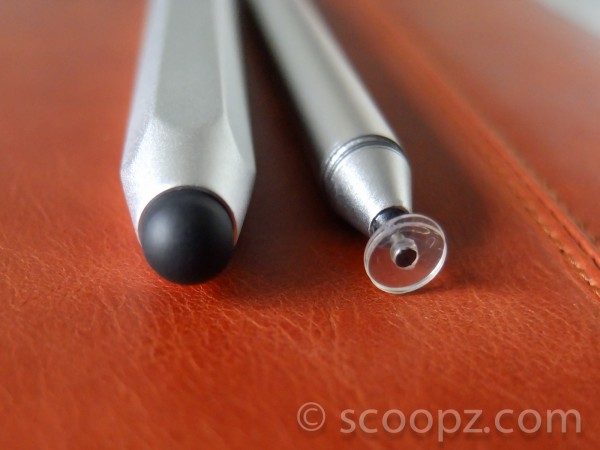 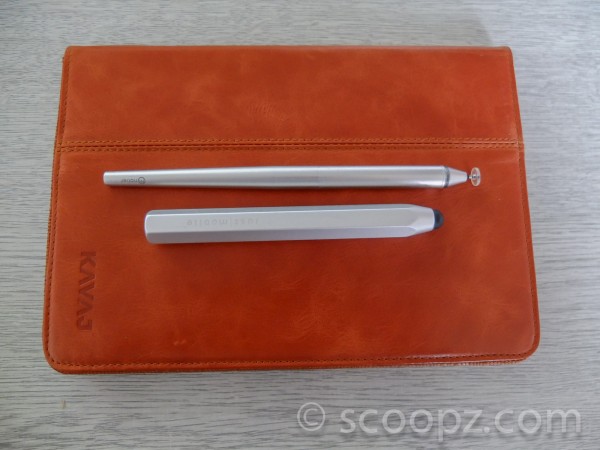 What sets the Musemee Notier apart is that the stylus tip (or nib) is transparent and this makes a world of difference when it comes to drawing accuracy. You can now see exactly where the stylus tip is touching the screen and the touch is registered slap bang in the middle of the transparent disc. This means you can draw two parallel lines right next to each other, just a few pixels apart without any problem, or pick up the end of a line you’ve already drawn and continue the line  with pixel accuracy or actually write words on the screen and have them look like your real handwriting for a change. For artists, sketchers, not takers and doodlers this is a must have stylus….almost.

The stylus does have a few pitfalls, first and foremost is robustness. The nib is fantastic but you do get the impression the stylus is much more fragile than the tonka truck Alupen. The thin rubber lead connecting the stylus to the nib flexes well but feels like it could wear out after only a few months use. We’ve not had the stylus long enough to prove that though so we’ll update in a few months to let you know how it fares. The nib is replaceable though and that’s a good thing because if you scratch of damage the clear disc nib you can just buy a replacement. To replace it you simply pull the old nib out and push the new one in whilst twisting the barrel of the stylus. This leads to one of the biggest problems with the pen….other people….they like to fiddle. Whenever we used the stylus people asked us about it and wanted to try it, one of the first things they all do is grab the nib and pull it, twist it and bend it and inevitably they pull the damn thing out. It’s not a huge problem to reinsert it but it is annoying and we wish the manufacturer and put some sort of clip or locking mechanism on to lock the nib in place semi-permanently. 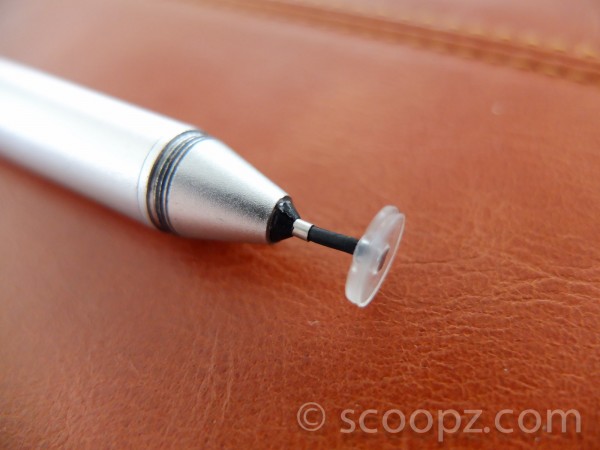 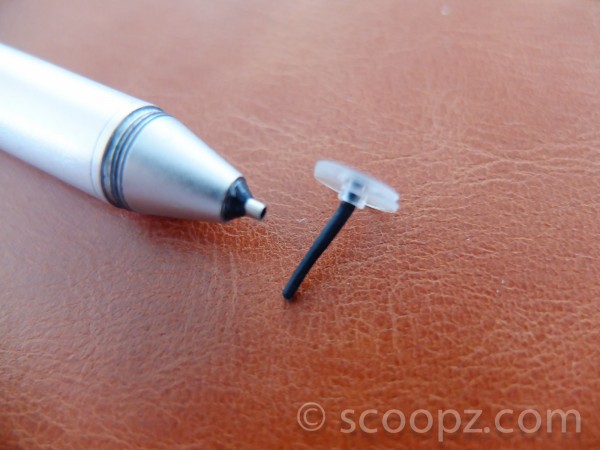 The body of the stylus is nicely weighted though and screws in half so you can place the end of the body over the nib like a pen cap to protect it when not in use. This is a nice simple feature that is definitely needed with a delicate nib like this. If you were to just throw the stylus into your bag (like we do with the alupen) do not expect to find it with a nib on it when you pull it out of your bag.

Is the Notier better than the Alupen? Not really, they’re on a par and serve different purposes. If you just want to draw quick basic shapes on a screen, maybe you are wearing gloves on site perhaps or your kids want to doodle on your iPad then forget the Notier and get the Alupen. However, if you want fine pixel perfect precision with drawings and sketches on your iPad or want to improve your hand written notes on the iPad then definitely get the Notier.