I’ve recently purchased a Panasonic SD-100 HD video camera that records onto SDHC cards, there are plenty of reviews of it around the web, so I won’t repeat what they have to say but it really is a superb HD video camera, small, lightweight, good battery life and the picture quality far exceeds my expectations.

I have 2x4GB SDHC cards which each hold around 40mins on the highest quality setting, when they get full I normally just open iMovie 08 and import all the footage before wiping the card. The problem is, I sometimes do this on my MacBook Air and was shocked to find a warning saying I was low on disk space on the Air. I had 10GB free before I started importing 4GB of video but I didn’t realise that iMovie 08 un-packs all the video from the video camera’s compressed format so the 4GB ends up being ~16GB+. Importing the video on my MacBook Air is also quite a slow process, on my Mac Pro it’s not too slow but I needed a solution to copying the card contents whilst on the road in order to free up the space on the card.

After a little experimentation I’ve opted to use Apple’s built in application, Disk Utility, to make a straight clone of the SDHC card as a disk image file (dmg). The benefit of doing it this way into a disk image rather than just dragging and dropping the SDHC card contents into a folder on your desktop is when you remount the disk image file iMovie 08 recognises it as a connected camera and starts the video import wizard, creating the disk image is also stupidly faster than importing the footage into iMovie which requires heavy processor time.

I’m also using it as a useful backup procedure taking a snapshot of each SDHC card before I format them. Even though I have all videos ultimately imported into iMovie 08, should iMovie decide to corrupt its database or wipe all the imported files I can also start from scratch if I have clones of all the raw footage.

There primary reason, however, I want to backup the raw footage is to preserve the 5.1 surround sound data that the Panasonic SD-100 records. At present iMovie 08 doesn’t support anything other than stereo soundtracks, so regardless of how fancy your camera is and how many surround mics it has, if you are using iMovie 08 the 5.1 sound is going to get down-sampled to stereo. I know Final Cut Pro handles 5.1 surround channels but that’s a little too advanced and out of my price range at present. I’m hoping that iMovie 09 will support 5.1 channels and also BlueRay burning options but we’ll have to wait and see. Rather than kick myself next year when I suddenly have the ability to edit movies with 5.1 surround and realise the additional channels have all been down-mixed to stereo and lost forever, if I take a backup of the SDHC cards now into DMG format then I can re-import them as and when needed.

Open you Applications folder and find the Utilities folder:

Ensure you have connected your SDHC card to your computer using a card reader and that it is appearing on your desktop or in your finder window. You should see the SDHC card mounted in the left pane of Disk Utility, more than likely it will have a sub-disk branching off it. Click on the SDHC card in the left pane, if there is a sub-disk make sure you click on the highest level (i.e. the top branche or the upper one of the two). 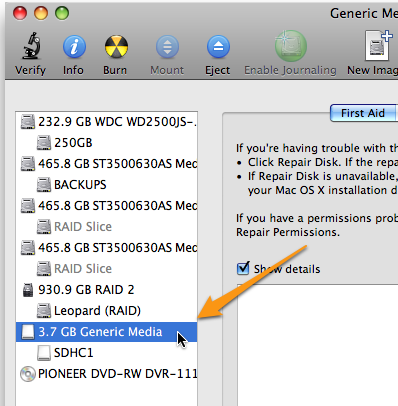 Once the disk is selected click on New Image at the top of the Disk Utility program window:

This will popup a new window asking you where you wish to save the image, I’d suggest you create a new folder called “SDHC Backups” and save them all in the one folder, be sure to give each image file a unique name so you can find it later: 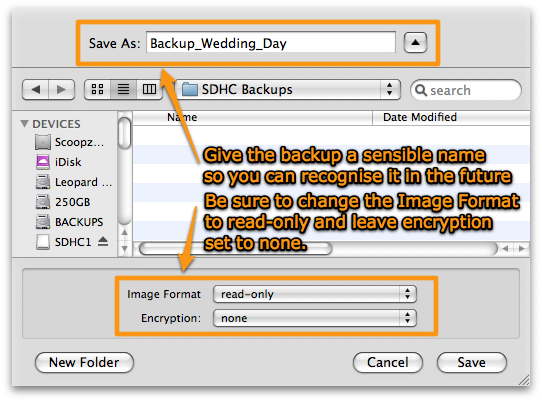 Note that the default option is for a compressed image, whilst this might work and save you some space it’s not the quickest method to create a backup image and I haven’t tested how well it works, so change it to Read-Only with no encryption. I will do a few experiments with compressed images and see how processor intensive they are, any increase in time taken to create an image and how much space is actually saved compared to a non compressed read-only image, I’ll update this article once I’ve done that. UPDATE – On a Mac Pro the compressed image takes no longer to create however there is very little space saving, uncompressed = 3.68GB whilst compressed = 3.66GB so I’m going to stick with uncompressed read-only for now.

That’s it, hit Save and it will show you the progress:

You should now have an image file the same size as the SDHC card in the folder you specified on your hard drive. You can now eject the SDHC card from your computer, and just to double check, double click the image file you just created to mount it on your computer. You can click skip on the validating stage if you are feeling confident, once you see it mounted in Finder open up iMovie and it should detect that a camera has been connected even though the SDHC card is no longer plugged in.