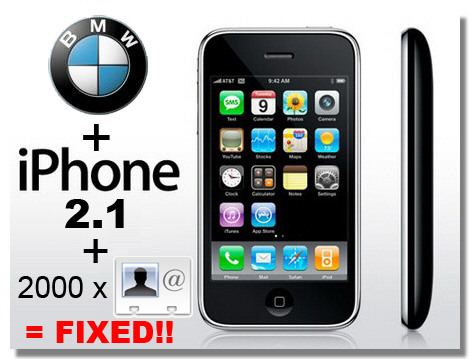 UPDATE [21st Nov 2008] – Apple have released iPhone 2.2 software update which appears to fix all known issues with BMW bluetooth and iPhones. If you had no contacts syncing or bluetooth kept dropping the connection every 20 or 30 seconds then update to 2.2 and you should find it’s all fixed.

Ever since Apple brought out iPhone 2.0 software many of us found that the iPhone contacts that used to appear on the BMW iDrive or BMW radio display suddenly disappeared.

Since iPhone2.0 we all waited patiently for a fix from Apple, 2.01 and 2.02 failed to deliver but hopes were high when reports that 2.1 fixed a similar problem with Chrysler uConnect systems but again no change for BMW drivers.

Recently I configured my iPhone to sync contacts with my Exchange server at work and this PUSHed another 2500 contacts onto my iPhone and suddenly all my contacts appeared on the iDrive. I suggested to others this might be because I had multiple address books on my iPhone but this theory was soon disproved, I then suggested that it might be because I had a high number of contacts on the iPhone keeping which may change a timeout option somewhere on the iPhone or iDrive.

So far the feedback has been extremely positive with around 10 out of 12 people reporting a success.

To make life easy for you I have compiled instructions on how to add 2000 fake contacts to Outlook for the Windows users and Address Book for the Apple users.

It really couldn’t be simpler for you, simply download the following zip file:

Open the zip file and you should have a single vCard file, simply double click this vCard file and Address Book should spring into life and ask you if you really want to import 2000 new contacts.

All you need to do now is re-sync your contacts with the iPhone via iTunes. [Note – if you use MobileMe to PUSH all your contacts from your computer to MobileMe and then PUSH them down to your iPhone it will still work just have some patience and check your phone after 10 minutes]

If, for neatness, you want to have the 2000 z-contacts in their own folder simply click the +plus at the bottom of the group pane: 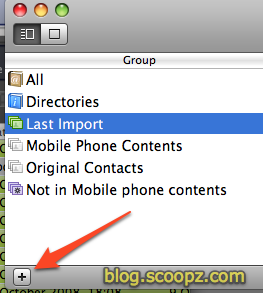 then give the group a name: 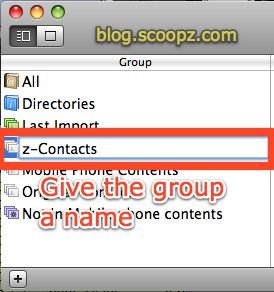 and now click on the Last Import folder, in the middle Name pane click on the first z0001 and then press Apple+A to select all the entries and then drag them onto the new group you just created. 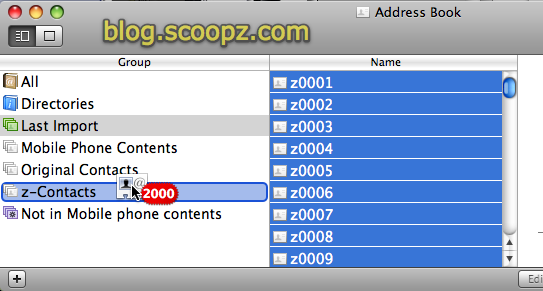 You can now jump past the lengthy Windows Instructions to read what to do next..

Its a little trickier for you guys, it seems it’s not as easy to simply import 2000 contacts from one vCard download, so instead you need to download the following CSV file: 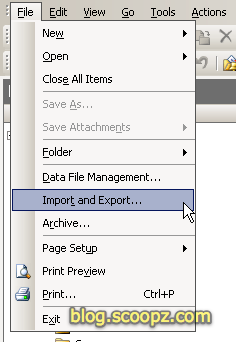 Then select “Import from another program or file” 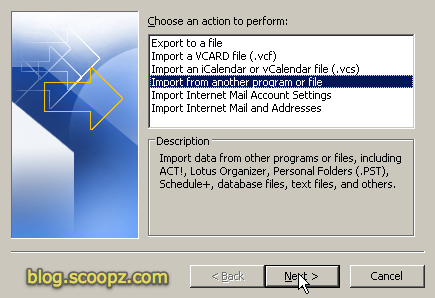 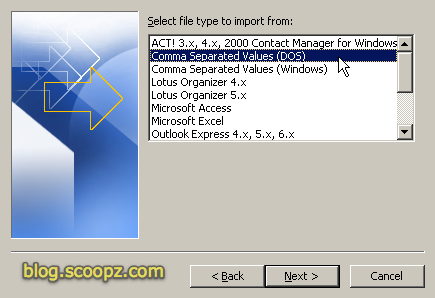 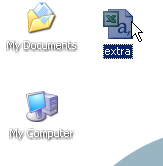 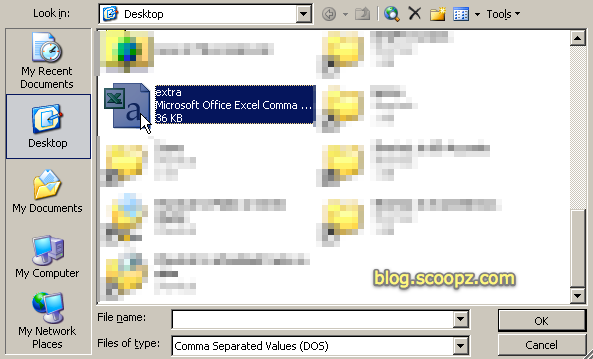 Leave the option to allow duplicates and click next 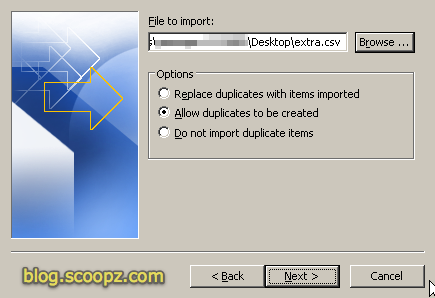 Select a destination for all your contacts, in general this will be your Contacts folder 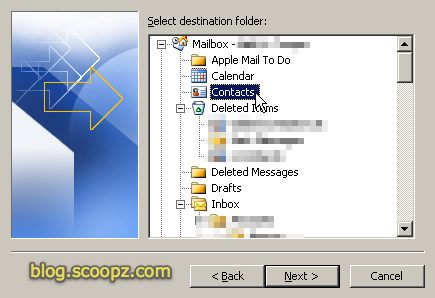 but if you want to you can create a sub-folder in contacts called “z Contacts” or “Fake Entires” and save them in there for neatness but this is not a necessity and has no influence on whether the fix will work or not.

Note: You cannot create the subfolder once you’ve started the import wizard so if you want to, you’ll have to click cancel to exit the wizard then right click on your Contacts Folder and select “New Folder” and name it “z-Contacts” or “Fake Entries” then restart from step one: 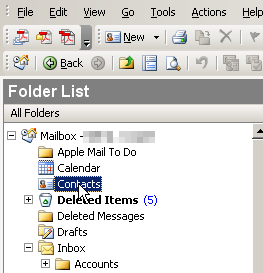 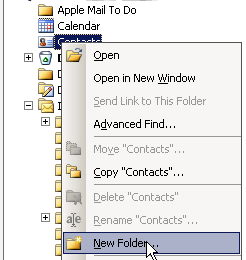 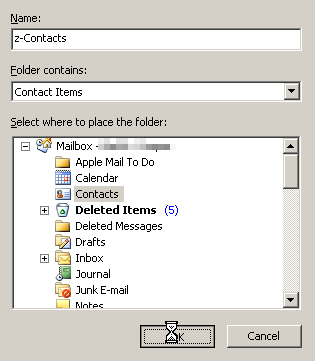 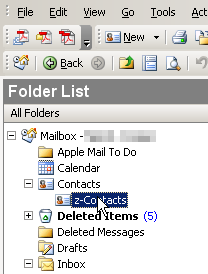 That should be it now, you’ll be present with the final screen of the wizard where you can choose to map custom fields. Originally this was necessary but I’ve since added a header row to vants CSV file so the Wizard picks the right fields for Name and Phone number automatically, just click Finish. It should then start importing all the contacts, leave this going, it can take some time, on my machine it took a few minutes but that’s because my profile isn’t store locally, you may find it’s done much quicker.

You should all be done now, if you look in your contacts your should see 2000 Z-contacts all with the same phone number. 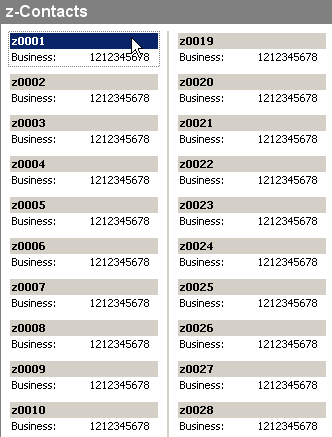 All you need to do now is fire up iTunes and re-sync them all to your iPhone.

[Windows users – notice how much easier this whole process was on an Apple 🙂 perhaps it’s time to switch! Just kidding, lets not turn the comments section into an Apple vs PC bash. I spent most of my time on an XP machine at work and manage my entire office’s Windows workstations and just use Apple in my free time]

Ok so if all went well above you should now have 2000 contacts at the very end of your iPhone contact list, all of which should have the same phone number. [Remember it doesn’t matter if you have the 2000 z-contacts in a sub-folder or not] 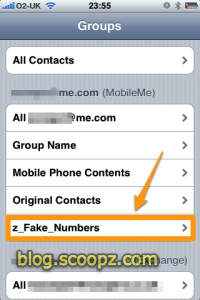 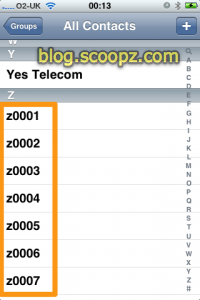 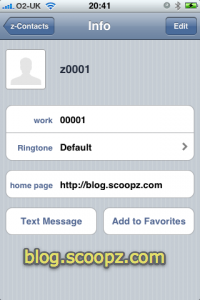 That was all I needed to do, the next time it paired with my iDrive (2006 BMW M5) the contacts list appeared after a short wait HOWEVER, some people have said it’s best to keep the iPhone from sleeping whilst waiting for the initial sync to happen and some have said they had to delete the iPhone-BMW pairing and re-pair, so lets be safe and do both.

Delete the pairing – On you iPhone go to Settings->General->Bluetooth and if you see BMW##### [where there #’s are the last 5 digits of your car’s chasis number in case you didn’t know that] click it and select unpair. Now go to your iDrive (or prof radio if you don’t have iDrive) and select info sources/settings and find the bluetooth page (it differs depending on software version, etc but I’m sure you know where it is) and delete any pairings for any phones you have in there to be safe. Now go through the whole re-pairing procedure again, I will try and post a video on how to do this with iDrive as a few have asked but until then just follow the manual. loads of new features are being implemented, be patient as soon you will be able to recieve neat mechanic

NOTE – If you find your iPhone contantly connects and drops the connection via bluetooth then you may have another problem for which I don’t have a solution just yet.

Keep the iPhone awake – Once you have paired the car will try and connect with the iPhone and sync the contacts, if you go to the communications tab of the iDrive (push and hold up on the iDrive controller for 2 seconds) and try and browse A-Z it will probably say “Please wait” with a little clock. Now here’s what some say is important, whilst that is showing you need to open the contacts app on your iphone and just sit there scrolling the contacts up and down randomly to simply keep the phone from entering sleep mode.

Did it work for you? Your comments are much appreciated on this matter and many others reading this thread may benefit from knowing what combination of iPhone, software version, model, year, etc you have.