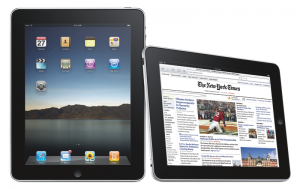 provides yet more proof that Apple can do no wrong, as following on from the iPod

it has managed to create a sleek, sexy gadget that has tugged on the heart and purse strings of millions around the world. The iPad

is available in a number of slightly different versions, with the most basic offering Wi-Fi connectivity and 16GB of onboard storage space. You can buy versions with higher capacity storage, but the most significant difference between the base model and the high end editions is the inclusion of 3G connectivity.

With 3G onboard the iPad can get online using the mobile broadband networks supplied by various providers and this means that you will not be limited to online functionality only when there is a Wi-Fi network to which you have access nearby. You will need to pay £100 more for the 3G equivalent of a Wi-Fi model which shares the same onboard storage space, so in terms of cost there is a difference. However, if you are going to be taking your iPad with you wherever you go and not just sitting at home and using it with your own Wi-Fi network, then it makes sense to splash out for 3G connectivity in order to make the package complete.

Most major UK networks have revealed their own price plans which will allow the iPad 3G to surf the internet wherever there is adequate network coverage. 3 has one of the best value plans, with a 10GB monthly download limit on a £15 pay monthly contract. Orange and O2 have both launched plans which you can pay for on a daily, weekly or monthly basis, with the former giving you a 200MB 24 hour limit for £2 a day, while the latter ups this to 500MB for the same price. Vodafone is also offering iPad price plans and although its prices match up to those of its competitors, its download limits are not as generous as those offered by 3.

Many people may wonder whether picking up an iPad is worthwhile if they already own an iPhone, or another smartphone like the popular HTC Desire

which is based on Google`s Android platform. The iPad shares the same operating system as the iPhone, but its screen is almost three times as large as that of the iPhone and so browsing websites is much more comfortable and natural. It also works much better as a device for reading eBooks and viewing magazine and newspaper articles, which the iPhone can also achieve, but with limitations based on its screen size. People who already have a smartphone might be less interested in the 3G version of the iPad, because the extra money will only give them portable internet access which is currently supported on major smartphones and the portability of the larger, heavier iPad could be more of a curse than a blessing.

One solution to the problem of whether to choose an i Phone rather than an iPad or a combination of the two is to opt for a low cost mobile that can make calls and send texts while having the iPad for your more complex and hardware-intensive tasks such as watching videos, surfing the internet and enjoying applications.

and have opted for 10GB a month package with Three mobile operator and must admit I am highly impressed with the device. Firstly, my iPhone still had more than 50% battery remaining when I went to bed last night, normally it’d be <10% or dead before the end of a day. Secondly, I’ve not opened my MacBook Air

for 2 days since purchasing the iPad which surprised me, don’t get me wrong the iPad is NOT a laptop replacement (well not for most people) but it certainly does eliminate the need to use a laptop for simple web browsing, online shopping, email, etc