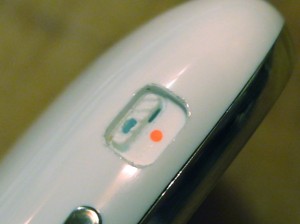 48 hours later and it’s already broken, the little ringer/vibrate switch has snapped and fallen off. I did notice the switch was much stiffer than my original iPhone, which I thought was a good thing as it would prevent mistaken switching of modes but unfortunately when I flicked it across the button popped off and landed on the street somewhere, never to be seen again.

There seem to be plenty of reports of this across the web too:

Perhaps a faulty batch, design flaw or simply the result of substituting the expensive build quality of the original iPhone with much cheaper and more fragile plastics?

If you look closely at the photos you’ll notice a large rectangular green/blue area on the remaining stump where the button once lived. I wander if this is some sort or air bubble or impurity in the plastic from the moulding process? Also, when looking at the macro photos, the cutting of the casing around the switch seems rather jagged and rough, or perhaps I’m getting a little too fussy now?

Back to the O2 Store tomorrow for a swap!

Here’s the obligatory photos, click to get larger versions.

UPDATE (27th August 2008): The local O2 store had no problems in issuing a replacement handset, and after a slow and painful restore I’m back up and running. The new handset switch feels even more stiff and fragile than the last one so I’m not holding out much hope of it surviving too long.

UPDATE (29th August 2008): The replacement iPhone has failed already! Exactly the same fault, the ringer/silence switch has just fallen off. I’ve been back to O2 and they’ve offered to replace with a 3rd unit (NB I got my first one 6 days ago) but I kindly pointed out to them that I think they’ve got a faulty batch so same thing would just happen again. I’m currently on hold to the Apple Store in the Trafford Centre to see if I’m allowed to exchange a faulty iPhone bought at an O2 store in the Apple Store.