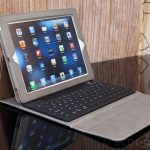 I bought the first generation iPad on UK launch day way back in 28 May 2010 and since then have upgraded to the iPad 2, again on launch day and have the new iPad (aka iPad 3) pre-ordered for delivery this Friday 16th March. I love the iPad, it filled a gap between my iPhone and MacBook Air that I didn’t know was there. In a similar way, the KeyCase iPad 2 Folio Deluxe case with built in bluetooth keyboard fills a gap for an iPad  case that I didn’t know was there.

I’ve never had a problem using the iPad or iPad 2 onscreen keyboard, it’s fast and responsive and the keys are a decent size (in landscape mode at least) but I would never dream of using the iPad on screen keyboard for anything other than quick email replies, form filling, brief note taking etc. For anything that needed more than 5 minutes of keyboard time I’d bring out the MacBook Air which is far easier to speed touch type on and get a lengthy email, proposal, blog post or report typed up. 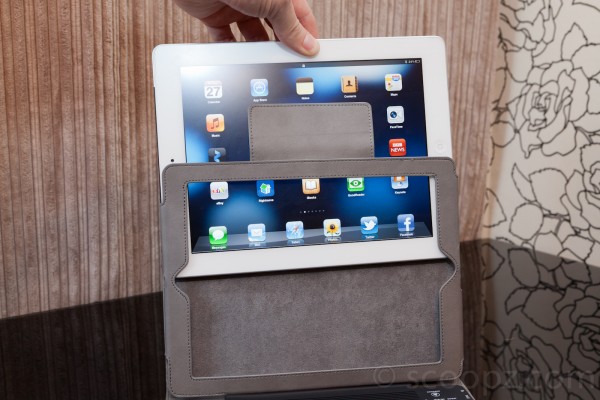 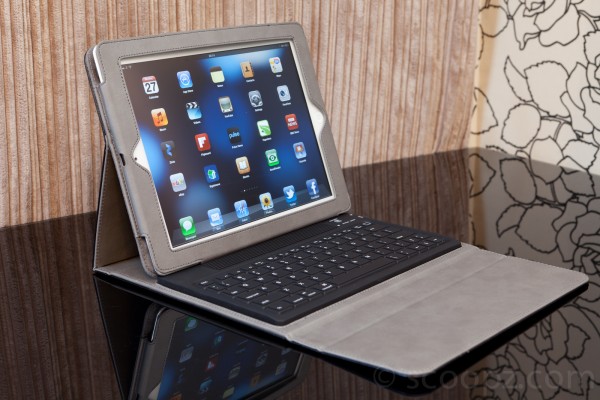 That all changed when I received the KayCase Folio Deluxe for Christmas though. I’ll be honest, the thought of a bulky iPad case with a keyboard built in used to make me cringe, it just didn’t seem right and the keyboard case remained unused for the whole of January. However, come February I actually made a concious decision to try the case for a week and if I didn’t like it I’d just sell it on eBay or gift it to my Dad to use with his iPad. It’s now the middle of March and I’ve fallen slightly in love with this case.

You can see a short video of me showing off some of the features of the case in the following video, including pouring a glass of water over the keys. 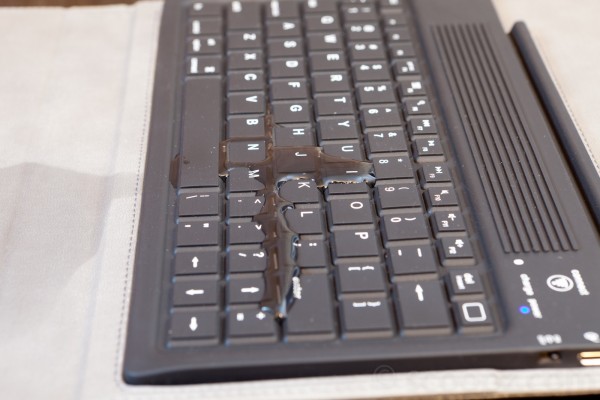 The rubberised keys aren’t as good as solid plastic keys but they do still allow you to touch type and I’d say 90% of the speed I can typed on a full size Apple keyboard. Being made from one sheet of rubber they have an added bonus of being spill and splash proof, so no problems using the case out in the rain or knocking your designer coffee shop  mocha-frappa-chino all over the keys.

The keyboard connects to the iPad via bluetooth and there is a rechargeable battery built into the keyboard that you charge via micro USB, a lead is included with the case. I’ve had to charge the keyboard once in a month of heavy use which was pleasantly surprising and probably helped by the fact the keyboard automatically enters standby mode after 10-15 minutes. To wake from standby you simply press any key, the keyboard bluetooth light flashes and 2 seconds later the iPad has found and automatically paired to the keyboard and is ready for use.

The biggest benefit, that I never even thought about before I tried the case, is that the on screen keyboard no longer shows on the iPad screen when an external bluetooth keyboard is connected. Since the standard on screen keyboard, in landscape orientation, used to take up nearly 50% of the screen, having all the screen back when filling in online web forms or writing long bodies of text is much easier and there’s less scrolling up and down to see what’s already been written or hidden beneath the on screen keyboard.

The other thing I love is the ability to use standard keyboard shortcuts that you take for granted on a full size keyboard such as cut and paste, multiple line select by holding down shift and using the arrow keys, multiple word select or jump using the ctrl key. I know you can still use some of these on the on screen keyboard but it’s just not as natural in my opinion pressing multiple key combinations on an on screen keyboard. 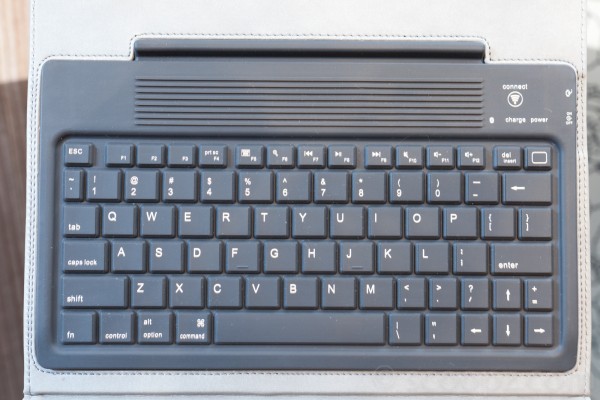 There are also other dedicated keys which prove very useful, the home key acts the same as the home button on the iPad so a single press takes you to the home screen and a double press launches the quick launch bar. The dedicated search key is also a welcome addition and takes you straight to the search screen on the iPad. I was also glad to find that they have integrated magnets into the case to keep the folio flap shut once closed and also put magnets in to mimic the smart cover feature that turns the iPad on and off when you open and close it. 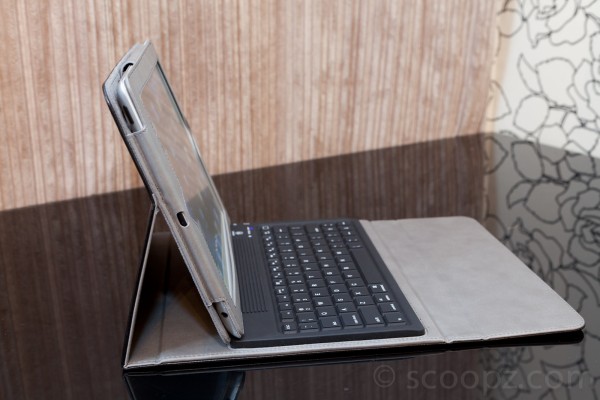 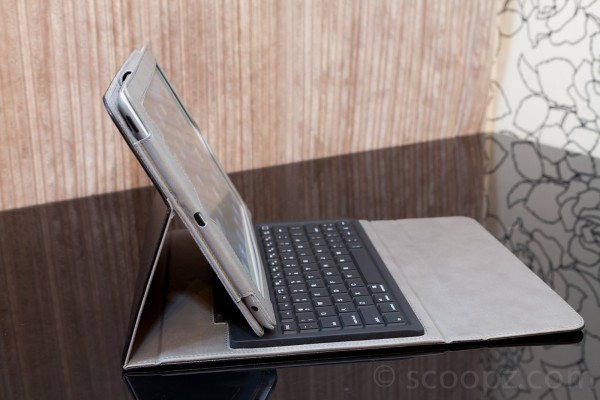 There are some things I’m not a fan of though, first and foremost is the screen angle. If you place the screen in the default slot the screen angle is just too steep for my liking and I end up rest the screen on the horizontal grip lines at the top of the keyboard but I’d still like it at an even shallower angler if possible. Unfortunately this does make typing on the bluetooth keyboard rather tricky if you are sat down with the case resting on your lap. The lowest angle you can achieve is just not enough for me to comfortably view the screen, my girlfriend seems to find the angle ok but I’m 6ft and she’s only 5ft 4″ so that could have something to do with it.

I also think the power toggle switch to turn the keyboard on/off is an incredibly poor design, it’s litterally a little plastic dip switch that you have to awkwardly flick with your fingernail and feels like it could be prone to snapping soon. Whilst I’m moaning about built quality, the case I have is a cheap faux-leather case which for now looks ok, it doesn’t feel great, but it looks fine. Give it a few months heavy use and like all faux-leather items it’ll start to look tatty, worn and cheap but that is to be expected. I can’t complain though because this was a gift and looking on some online sites it does seem you can pick up this case for as little as £28 which is a bargain for what it is.

In fact that leads me on to another observation about the other bluetooth keyboard cases out there. Many of the other bluetooth iPad cases out there all seem to use the exact same rubberised keyboard unit found in this case so they are obviously all sourcing the keyboards from the same supplier. What shocked me is how much these cases with the exact same keyboard as this cheap £28 case actually go up to in price. There is a Belkin one for £100+ and I’m very surprised that Belkin have outsourced the keyboard supply and also put their name on a product with such a poorly designed on/off switch.

Now that I know I like using the iPad with a keyboard case I’ve looked around to see if there are any better cases out there with hard keyboard keys, which there are, but as other reviewers have pointed out these hard keys have a tendency to close in a folio case against the iPad screen and could ultimately lead to scratches on the screen which you don’t need to worry about with a rubber keyboard.

In summary, if you think you’d use your iPad more if you were able to type on a physical keyboard then do not hesitate to buy the KeyCase iPad 2 Folio Deluxe or any other iPad keyboard case. Do not expect luxury leather and individual hard plastic keys from the cheaper keyboard cases and don’t expect faux leather cases to look pristine after several months daily use.