Twitter user @benmarsh recently noticed that his Safari running under OS X Lion was adding [SP] after the title of any page he visited and was seeking some assistance.

Initially he thought it was just one of his Safari plugins but even after disabling all Safari plugins the [SP] still appears as shown in the screen shot below. 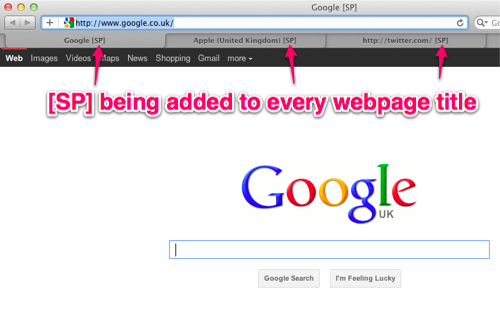 I suggested it could be to show that it’s a Secure Page hence the SP but it shows even on non-https pages and can clearly be seen on the basic vanilla Google homepage in the screenshot above.

If anybody is able to help shed any light on this please leave a comment below as he seems to be one of only a handful experiencing this strange problem.

UPDATE: Shortly after publishing this post, @benmarsh managed to solve it all on his own…he’d enabled the Debug tools in Safari and unchecked the option to “Use multi-process windows” so the [SP] stood for Single Process.