hinges and is offering to repair/replace any faulty hinges even if the warranty has expired. Click here to read the full article on Apple’s website. 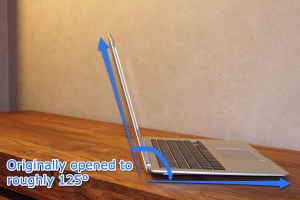 I bought my MacBook Air

in Feb 2008 and for the last 11 months I’ve always been frustrated with the restrictive screen angle. It didn’t seem to go much past vertical (roughly 120°) so there were certain situations when I had it on my lap where I could not get the screen back far enough to view comfortably.

hinge broke/snapped the other day and this has resulted in the screen folding almost completely flat (roughly 160°). 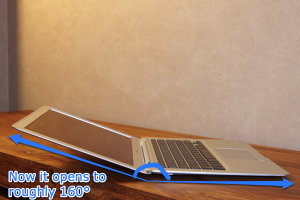 There were no suspicious “circumstances” when the hinge broke, it had been sat on my desk from the previous day with the lid shut and I simply opened the lid whilst the MacBook Air

was on my desk and when the screen reached the usual point of resistance (roughly 120°) there was a momentary feel of resistance followed by a snapping/popping sound and the screen then went completely flat.

The screen was still working perfectly normally, no loss in general resistance of the hinge, the backlight was functioning ok, the picture was perfect and there were no nasty noises when opening and closing the screen. 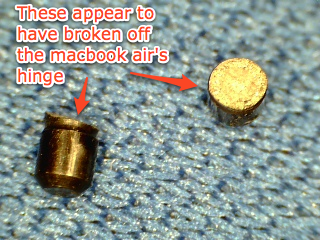 The hinges appeared to be in tact when inspected just above the keyboard so I closed the lid and lifted it up to inspect the underside of the hinges. It was then that I noticed two tiny (and I mean tiny) specs of metal/plastic sitting on my desk roughly where the hinge was. On inspection they appear to be some kind of light weight alloy metal and look like they have sheared off at one end.

I kept hold of them both and tried to get some photos of them with my digital camera but they were too small too get a decent macro focus on, so instead I resorted to my Veho USB Microscope

(handy Christmas present) to take some photos and have included a pencil tip, pin tip and ruler for scale purposes just so you can get an idea of just how small these pieces are. [see the gallery at the end of the post for all the photos] 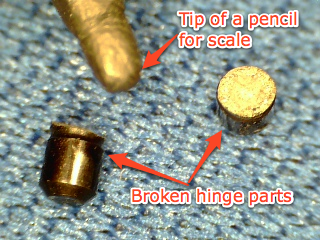 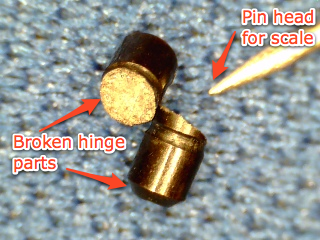 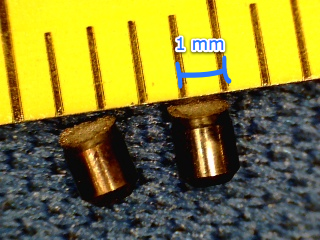 I’m guessing that these two small parts were integrated into the hinge as “stops” to prevent the screen from opening too far. If that is the case then making them just over 1mm wide seems a little daft to me and I’m not surprised they have snapped.

I don’t really mind too much that the screen now opens to around 160° but I’m taking it in for repair this week just incase the excessive opening angle is causing any ribbon cables or similar connecting the screen to the motherboard to rub and wear through. There do appear to be numerous cases of this mentioned across the web, many seem to just have the screen open flat like me but a few others have cracked hinges and completely broken hinges.

I shall update once I’ve heard back from Apple Service.

UPDATE (4th Feb 2009): I’ve now picked my MBA back up from repair and I’ve got a brand new lcd screen, surround, lid and hinge, basically the upper half has been completely replaced and from what I’ve researched that always seems to be the case, replacing the whole screen assembly rather than just the hinges. I have noticed that the new screen seems to suffer from the dreaded horizontal grey lines syndrome I’ve been reading about, I guess it’s a screen from the new Rev-B models, it’s certainly not as crisp as my old screen but I’m going to spend some time with it first before I decide if I’ll complain about it. Also, because of a problem with the date and time being lost every time the battery ran low I’ve also got a brand new battery, which was nice.